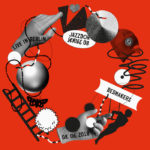 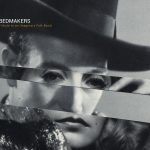 Looking for the perfect Jazz-Impov band consisting of a quartet of French nationals whose repertoire is exclusively Anglo-Saxon folk music? Well look no further than Bedmakers.

Expressive throughout with tropes stretching from a capella arabesques and double-tonguing from the saxophonist to triple stopping violin runs and percussion gallops, Bedmakers prove that these simple melodies can be reconstituted without any lose of groove or passion. Without losing an iota of sophistication in their interpretations, the quartet defines itself as a jubilant party band for any century.

read the review on Jazz Word

Tribute to an imaginary folk band

Bedmakers reunites four musicians from polymorphic and singular musical universes. Anglophile saxophonist Robin Fincker, drummer fabien Duscombs, violinist with electroacoustic drifts Mathieu Werchowsky and Irish bassist Dave Kane.
Bedmakers storms the meanders of Anglo-Saxon folk music, with its "Tribute to an Imaginary Folk Band". The four unclassifiable improvisers dig, scratch and rumble this fertile sonic ground, nourished by multiple decades of oral tradition in order to excavate its melodic essence. Melodies are caught in mid-air. These tunes that one hums without realising, that feel familiar without being able to point their source, find themselves out of their original context, superposed or extended, declaimed or only suggested, sometimes buried under a storm of concrete-noise music or distilled in a minimalist blow.

In 2020, Bedmakers continue their journey in the meanders of Folk music with a new repertoire. Here is combined popular music, blues and free improvisation. At a time collector and a re-inventor, the quartet shakes the relation between traditional and experimental music and makes appear scraps of jingles and ritornellos in the flow of improv jazz. The arrival of Irish double bassist Dave Kane, gives new spirit to this research.

As they grow more distant from programmed contemporary jazz music, Bedmakers expands their repertoire in an inexhaustible reservoir: a mix of collected and original compositions. The quartet seeks to evoke the feeling of letting go, the trance, the collective jubilation on a dance floor by a greatly dynamic musical experience. A backwash of noise gestures, ceaseless loops of the bow, heady melodies of the saxophone and the quartet’s new rhythm section's polymorphic sound converge towards a common goal of invisible dance and molecular shock.