On tour in Ethiopia and Kenya from 11 to 27 february 2020 with the Alliances Françaises of Diré Dawa, Addis Abeba and Nairobi. 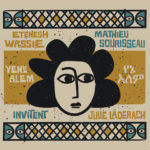 Since their encounter in 2007, Mathieu Sourisseau and Etenesh Wassié share a great artistic complicity. The source for their music lies in traditional Ethiopian songs, revisited through playing styles and melodies that cloud the tracks. Etenesh’s wild and secret voice carries us away. Mathieu’s bass play, crossed by several worlwide influences, carries us away. It is an intense emotionally piercing trip. They continue their journey with the double bassist Sébastien Bacquias. The warmth of the double bass and the profoundness of the acoustic bass unite perfectly with the deep tone of Etenesh’s voice. The crossing of strings forms a sonorous mat from which new melodies emerge, reminding the watermark of the Ethiopian forms. We can feel rock, jazz, improvised music and world music influences. A universe where this unique voice can self-express in all freedom. The bow of the double bass also reminds of the messenqo, a traditional Ethiopian mono-string-violon that accompanies all the heritage songs, such as Ambassel, Tezeta and Bati, in which Etenesh excels.

No way to deny the Ethiopian roots of the music played by Etenesh Wassié, Mathieu Sourisseau and Sébastien Bacquias. But this trio is playing on a much wider territory. Far from the glitz of an off-ground thought world music. What is well invented here in this delicate combination of these three artists is raised from the friction of ethio-trad with noise textures, from the consummate art of the folk nostalgia with the scansions and backing up solid grooves. The purpose of the trio is probably not the song but, more certainly, the six-handed story that the two musicians and the singer assemble in live. A upmost moving story shaped by this music : familiar in its magic and hybrid in its instrumentation. In March 2018, a double bass was added to the lyrical booms of the original duo, born in 2009 from the combination of a voice and an electro-acoustic bass. And this transplant is successful. The low register, over-represented, does not provoke any endless manly debate. In fact, reciprocal comments such as the solos of the eight strings of the pair Sourisseau/Bacquias push Etenesh Wassié's voice to its limits. From his perfect technique, from his majestic cracks to his poetic statements full of bright energy that could be compared to a form of rage. A rage that could’ve been magnified by Bessie Smith or Abbey Lincoln. Then, a traditional form like the Tezeta catches up with the field of blues and, therefore, African-American jazz. An increasingly bewitching field as new songs are composed, which should be fuel in a new album in 2020