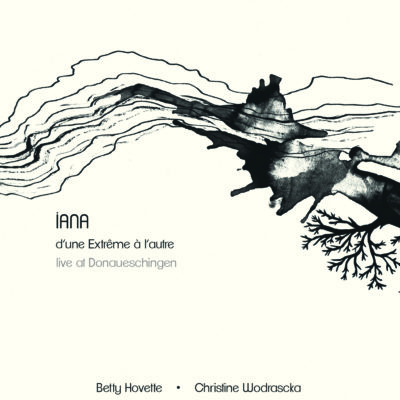 Throughout the dynamic expression of passing patters and motifs from one to another that make up the sound miniatures on D’une Extrême à L’autre, Wodrascka and Hovette stake out antithetical positions even when in double counterpoint. One sticks to higher notes and the other lower ones, then switch. Meantime enough space is kept between the two expositions so that they don’t overlap. While timbral architecture isn’t definite, most likely the playful jumps and jerks, propelled with pedal work are from Wodrascka, while the hunting-and-pecking narrative, emphasizing micro-movements relates to Hovette’s processes.

Deeper and darker in execution, the 43 minute plus title track brings in more echoes from the fallback, soundboard and tightly wound strings than the previous pseudo-études. With the sometimes more individualized processes slightly more muffled the tendency towards abstraction and pure sound is intensified. Strummed chords and sympathetic vibrations poke out from the sometime kinetic program, but at the same time equal pressure towards creating sequences of impenetrable near musique concrete vies with the syncopation, Finally with jagged and tremolo repetitions seemingly bouncing off soundboard, piano timbres reach a point of affective concurrence.